After doing our Egg-citing exploration experiment the other day and Jake being all into it, I decided to do a couple other experiments with him. Below you will see.

How an egg shell disappears?

When I saw this over at Science Sparks several weeks ago, I knew Jake would love to do this experiment.

Place the raw egg in the container, then cover with vinegar. You will notice almost right away the egg starts to bubble(that is the chemical reaction that is happening)

We left it in the vinegar for 2 days and then took it out and washed it off, it was clear. Then we used it for another experiment(see below). 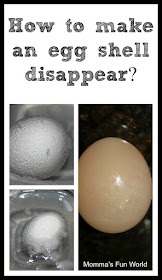 What Jake noticed on this experiment was the egg bubbled, was firm, it bounced on the counter, and got bigger.

How to shrink an egg?

Materials:
Light karo-syrup
Shell-less egg (experiment above will get you a shell-less egg)

We took the shell-less egg from above experiment and used it for this next experiment.

Place egg in container and pour karo-syrup all over the egg. Leave it in there for 12 hours. You will notice after a couple hours it starting to shrink.

When an egg is placed in the syrup the water moves out and cause a decrease in mass. This is a result of osmosis occurring. 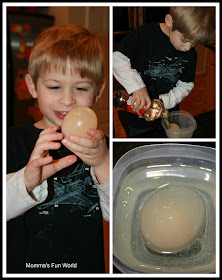 You can see in the picture that Jake is amazed at how the egg shell is gone. Also, you can see that the egg is firm not squishy like the picture above.

What Jake gathered from the shrinking egg was it was a brighter yellow, squishy to the touch, and smaller.

How to make an egg erupt?

Take your shrunken egg and place in water, we used colored water to give it a twist for the end result. Then wait several hours.

Your egg will reabsorb the water and grow again, but will also turn colored if you made the water colored.

Then Jake took it out of the water and I had him poke a hole in the top of the egg with the toothpick.  Water squirted from it making a volcano.

Jake gathered from this experiment was that the egg turned blue from the food coloring, was firm like it was before we shrunk it and grew in size. 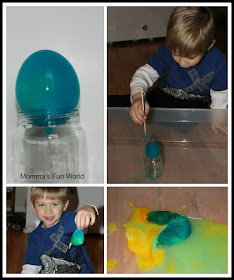 We had a lot of fun doing these egg experiments over a couple days. Also, talking about how egg looked and felt different with each experiment. The part that amazed me the most was that you could do all 3 experiments using one egg. 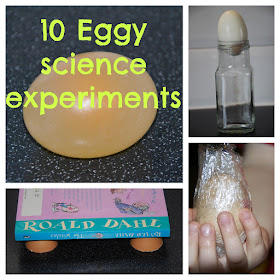 If you like to explore and try new experiments be sure to visit our Science board.